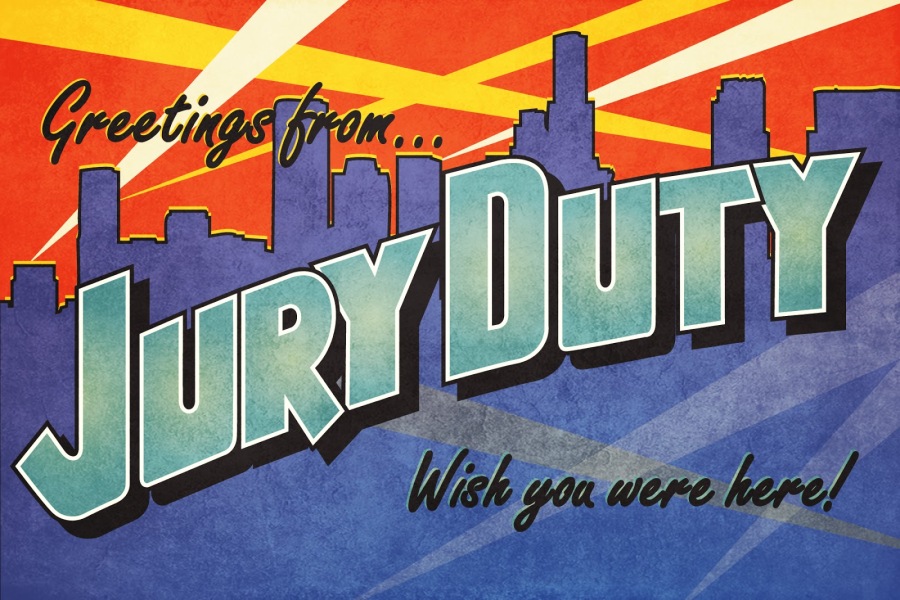 As we were being prepped for the possibility of serving on a jury, we were given an overview of the cases going on that week which would require a jury to be seated for them. There were a number of cases that week, and it was made pretty clear that most us in the jury pool (there were about 80 of us who were called to show up that day) would likely be seated on one of them. The biggest case that needed a jury was a murder trial which we were told would probably go several weeks. When I heard that, I had this sinking feeling in my gut that with my luck I would end up on that one.

Now, you need to understand that at that time I was working between 60-70 hours a week at two jobs and taking all the speaking and preaching opportunities I could get to make ends meet. My wife Mandi had had a knee replacement several months before and was unable to work for two months, so I needed to work as much as I could to keep from falling too far behind and then to catch up once she was back at work. Serving on this jury meant missing most of my work week, spending more on gas, and paying for parking. The court did not provide any food or snacks or coffee. Unless I brought my own I would have to buy that too. I was not looking forward to that. Sure, I was performing my “civic duty,” but every day I was going to serve would hurt. The case ended up going about three weeks.

But I have to be honest. Serving gave me a real appreciation for our system of justice that I don’t think I could have gotten any other way. This murder case was not a simple open and shut formality. It was complicated. There were lots of variables to consider. Perhaps the biggest variable being that the person being charged with murder was not the person who actually committed murder, meaning this person was not the person who shot and killed someone.

The facts of the case:

The legal question we needed to decide:

The questions we needed to answer:

Things were further complicated by the fact that gangs were involved and the fear of being seen as a “snitch” or a “rat” made witnesses scared to talk to the police.

Add to that that the events surrounding the shooting happened at a crowded party at 2am in a courtyard where there was next to no lighting.

Add to that the people at this party had been drinking and smoking pot since the party started about 5pm.

Add too that that these events all took place 4 years ago.

I was very glad that this decision was not left up to just one person, or even to two or three. Twelve people with no skin in the game would have to hear the facts, the arguments, and the testimony and unanimously agree as to agree or disagree with the prosecution’s charges.

The case was really interesting, and I found myself humbled to be a part of it…and kind of caught up in it. The truth is, I found myself really enjoying it!

I also ended up making a bunch of new friends. It is not uncommon for jurors to become close, especially after all you spend so much time together. In fact we have all stayed in touch and are planning on getting together for a reunion in a few weeks.

After thinking about these events, I realized that while it cost me a lot in some ways (financially and time away from family being the top ones), I was glad I was given the opportunity to be part of it. It was an important thing to do. It was something that I realized many people are not willing to do and intentionally work to get out of doing.

I have been learning that, like jury duty, many of the things God calls us to do come at inconvenient times and with unexpected costs.

One of the things that came out as a result of all this was how much I was still depending on myself for meeting my family’s needs, and how little I was willing to trust God to be the Provider. That was a hard thing to see. But as I have said before, life is really about learning two big lessons: 1. You are not and were never meant to be enough, and 2. Jesus is enough, and that in Him, through Him, and because of Him you will always have enough. Sometimes the only way to be learning those lessons is to be taken into a place when you know you are not enough and Jesus has to be enough or you are done. For me, losing three weeks of pay put me in the position to continue learning those lessons. That was a painful thing to learn, but I’m glad He continues to teach me those two lessons. Makes me remember Matthew 6:31-34,

Sometimes we don’t want to do the things that God wants us to do because of the cost. But once we do it, we often—admittedly not all the time but often—see the point of it, and are the better for having done it and paid the price, we see that it is worth it.