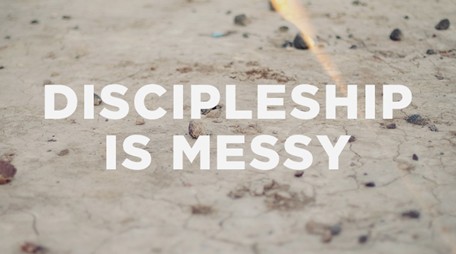 Discipleship is messy. What do I mean by messy? I mean perplexing, confusing, frustrating. For example, it is not uncommon for people to not understand what things mean or why things are a certain way and not others. It is not uncommon for there to be hurt, offense, disappointment, and anger. It is messy because when you step into someone else’s life there comes a point where you will see their mess, stumble upon their mess, or be brought into their mess. It is messy because there are spiritual forces who are hell-bent (pun certainly intended) on sabotaging it in any way they can.

Now I am not saying that there is not a lot of beauty, joy, and rest in discipleship. There certainly is. And the blessings that come from it far outweigh the cost. But we need to be aware of the cost of discipleship, and part of that cost is being willing to disciple people when we encounter the struggles, difficulties, and attacks that inevitably come as we grow in Christ. Let’s take a look at each of those.

First, discipleship can get messy because spiritual growth can be confusing to go through. Just as growing up comes with growing pains, ugly stages, making mistakes, and acting out as we struggle to figure things out, we experience these same things as we grow spiritually.

We should not be surprised by Peter’s highs and lows. All through the Bible we see God’s people—even the people He works with and through the most—struggling to learn, grow, and change…even after great advances in faith and practice.

In Genesis 6:9 Noah is described as blameless and as a person who walked faithfully with God, but after the flood we find him drunk and passed out on the floor naked.

David is described as a man after God’s own heart in 1 Samuel 13:14. After he killed Goliath, was established By God as king, written many of the Psalms, and been told by God that his dynasty would last forever, David commits adultery and murder.

What is the point of these examples? Why include them in Scripture? It is to show us two things: first that we should not be surprised when we see people struggle and fall. It happens regardless of age, position, or maturity.

Second, it assures us that God’s love for us is based in His grace. God did not stop listening to Noah’s prayers after he woke up. David is still called a man after God’s own heart after his affair with Bathsheba and God did not withdraw His promise to David. Jesus’ commitment to Peter did not change after this. In fact, the next chapter has Jesus bringing Peter with Him to see His Transfiguration, a privilege given to only three of Jesus’ disciples.

We are fallen, broken people. There is not one person in this world who is not. Why should we be surprised when people we are discipling struggle, miss the point, don’t listen, or get into trouble? The messiness, the murkiness, the perplexing nature of spiritual growth is one of the very reasons we need to be discipled, why we need mentors, guides, teachers, models.

Second, discipleship can get messy because life gets messy. The world is broken. People are broken. We not only fall down, but we get knocked down. In a way when we fall down it is easier to understand—we know who to blame, we can control or have some measure of control over learning to avoid making the same mistake.

But that is not always true with getting knocked down is it? Sometimes life hits us with a curve ball that we did not—indeed could not—expect. Sometimes things happen that we cannot control, influence, or understand. For instance, how do you disciple the parents who just heard their teenage son died in a car accident; the person whose marriage fell apart in spite of all the prayers, work, and tears to keep it from happening; or the person in an abusive relationship. Those are not hypothetical possibilities, but actual circumstances of people I have discipled. Times like these can get very messy when it comes to discipleship.

And third, discipleship can be messy because it is warfare. Christianity is not a doorway into a placid life that is full only of scenic vistas and pleasant strolls by cool bubbling streams. It is war! When Peter blurted out his disapproval of Jesus needing to suffer and die and that he would not let that happen, Jesus does not say “get behind me Peter,” He said, get behind me Satan (Matthew 16:23). Yes Peter said it, yes Peter was responsible for what he said and thought, and Jesus would die to forgive him for it. But that thought was driven by Satan. This was a spiritual battle.

There is a worldwide coordinated battle going on as the Kingdom of God advances into this world. While the gates of Hades will not overcome it (Matthew 16:18, NIV), that is not the same as not trying to stop it with everything they have got. We are still told that the devil is like a hungry lion looking for someone to devour in 1 Peter 5:8. We are still told to avoid giving the devil a foothold, lest he get a grip on us and pull us down in Ephesians 4:27. We are still told to put on the armor of God, and to carry both sword and shield (Ephesians 6:10-17).