There are six things the LORD hates, seven that are detestable to him: haughty eyes, a lying tongue, hands that shed innocent blood, a heart that devises wicked schemes, feet that are quick to rush into evil, a false witness who pours out lies and a person who stirs up conflict in the community. (Proverbs 6:16-19).

The good news is that God never gets angry for those reasons. God’s anger is never because He had a bad day or that He had a sudden change in plans. He is never angry because He woke up on the wrong side of the bed.

God gets angry for only one reason: sin. That’s a good thing, because it means that God is good, righteous, and just. It means that He is never going to sin Himself. He is always going to act true to who He is, and that means He is trustworthy.

I’ve heard some people say “God loves me just the way I am.” That is only half true. God loves you just as you are in Christ. And He loves you too much to leave you as you are! Take 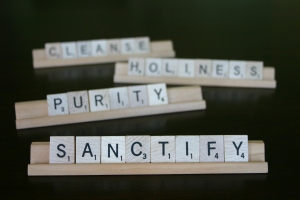 a look at Proverbs 6:16-19. Do you see any of those sins in your life? God took them serious enough to have His Son suffer His wrath for them on the cross. His Spirit wants to work to rid those sins from our thoughts and behavior. How can you join God in that work today?