My oldest daughter Maggie likes this YouTube show called Good Mythical Morning. The show stars two friends, Rhett and Link, who talk about and do crazy fun things. One of the stunts they pulled was taking what is called “the ghost pepper challenge.” The video showed both of them eating and swallowing a ghost pepper, and then seeing who could go the longest before reaching for some milk or ice cream for relief.

This bit of bravery buried itself like an evil seed in Maggie’s psyche, and grew into a desire to do her own YouTube video of a ghost pepper challenge. She talked her youngest sister Rachel and her friend Liam into doing it with her. So great was her desire to go through with this, that she spent her own money on 3 ghost peppers, 3 half gallons of milk, and a gallon of ice cream and some sherbet. Perhaps the best thing was her desire to try and stand out by wearing a blue full-body suit while she did it.

She made me film the event. And before I get any nasty comments, all the parents were on board, it was supervised, and yes, in addition to the eager permission of Maggie, Rachel, and Liam (indeed it was more like begging) I have permission from Liam’s parents too. 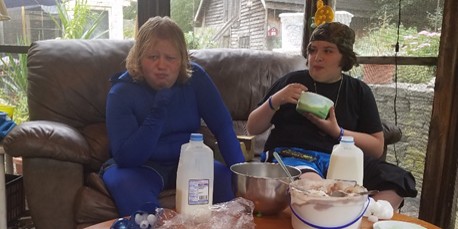 To Maggie’s credit, she was the only one of the three who actually ate and swallowed the pepper. And she kept it down!

But it was not long before Maggie realized that what 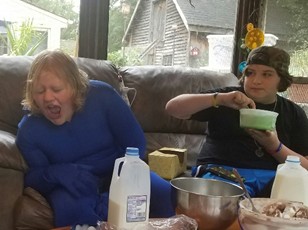 looked so fun and entertaining on TV was much more difficult in real life. It was about thirty minutes of burping, burning, crying, jumping, sweating, and exclamations of “fire!” amidst eating frantic handfuls of ice cream. When it was all over, she had a new respect for Rhett and Link, and vowed never to do it again. 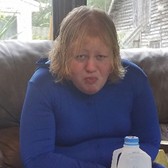 One can walk away with a number of lessons from Maggie vs. the Ghost Pepper: